The face of the Xbox Elite Wireless Controller Series 2 is the side that faces up when the controller is in front of you. 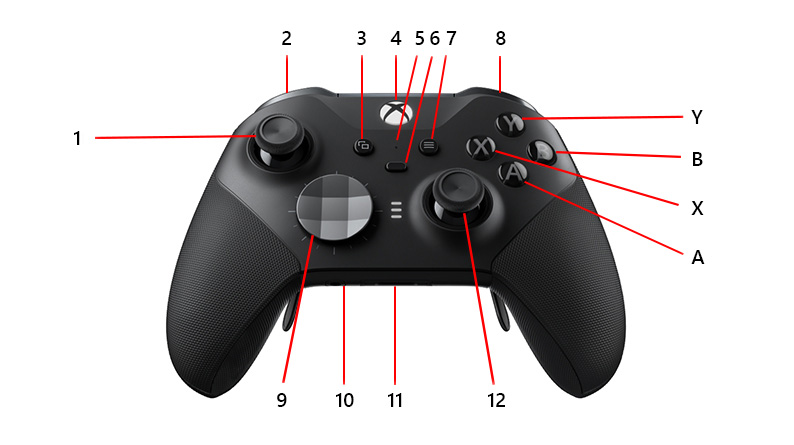 Left thumbstick  (1) and right thumbstick  (12): These are small joysticks, raised above the controller surface with rubbery pads. The left stick resides on the upper left of the front face of the controller, and the right stick resides on the lower right of the front face. The sticks are used to interact with games, apps, and the Xbox One interface. These move directionally and they can also function as clickable buttons when you press down on them. The controller includes different types of sticks that can be swapped out and the tension of the sticks can be manually changed using the thumbstick-adjustment tool.

Left bumper  (2) and right bumper  (8): These are oblong-shaped pressable controls that reside on the top of the controller to the left and right of the USB charging port. These controls are used to interact with games, apps, and the Xbox One interface. They are often used to let you jump between sections of the interface but have varied functionality depending on the game.

View button  (3): This button resides just to the lower left of the Xbox button (around 7 o'clock). Use this button to focus in on an activity in a game or app such as pulling up a map during a role-playing game. The functions of this button vary depending on the app or game.

Xbox button  (4): This button resides at the top on the face of the controller. It is slightly recessed and round. It has multiple functions:

Battery indicator light (5): This light appears directly below the Xbox button  (6 o’clock) and between the View button  and Menu button . The battery will flash when the controller is being charged with the USB-C cable or charging dock (both included). When the controller is fully charged, the light will stop flashing and turn solid white. For more info, see Charge your Xbox Elite Wireless Controller Series 2.

Profile button (6): This button resides in the center of the controller’s face directly below the Xbox button  (6 o’clock). Press this button to switch between controller profiles you create in the Xbox Accessories app on Xbox One or Windows 10. When no bars appear lit below the Profile button, the controller is using the default button mapping. For more info, see Use the Xbox Accessories app to customize your Xbox Elite Wireless Controller Series 2.

Menu button  (7): This button resides just to the lower right of the Xbox button  (around 5 o'clock). Use this button to access game and app menu options like Settings or Help, along with commands within the user interface such as Enter on a keyboard.

Directional pad (D-pad)  (9): This is a raised plus sign-shaped toggle that resides between the left and right thumb sticks. Used to interact with games, apps, and the Xbox One interface. It moves the focus up, down, right, and left in the interface. The D-pad can be swapped with the included faceted pad.

3.5mm port (10): This is a recessed port next to the expansion port on the bottom-side edge of the controller. Used to connect compatible 3.5-mm audio devices.

Expansion port (11): This is a recessed port that resides on the bottom-side edge of the controller. It's used to connect other accessories such as an Xbox One Chat Headset.

A  , B  , X  , Y  buttons: These buttons reside on the right side of the controller. The Y button sits in 12 o'clock position, with B, A, and X positioned clockwise. Used to interact with games, apps, and the Xbox One interface.

R
Rival is the author of this solution article.

Did you find it helpful? Yes No

Send feedback
Sorry we couldn't be helpful. Help us improve this article with your feedback.